....and now for something completely different.

In a break from my usual 15mm figures, and also from my ongoing projects, I bought some 28mm figures from Bad Squiddo Games, which is owned and run by Annie Norman, a.k.a. The Dice Bag Lady.

In her own words "Bad Squiddo Games provides gamers and painters around the world with the largest selection of female miniatures out there. As well as manufacturing my own line, I carefully hand pick stock from over 50 different manufacturers."

She goes on to say that "The number one aim for Bad Squiddo Games is to create and supply the miniatures that would have made the hobby far far better for my 10 year old self. To welcome more young girls and women into wargaming and miniature painting, as well as providing diverse options to the entire gaming community. And yeah – cool toys!"

I think that a look at her catalogue on the website shows that she is definitely achieving her main aim. Lots of lovely shiny stuff to tempt all sorts of gamers.

Anyway, I am a huge fan of the horror fiction of H.P. Lovecraft and when I found out that my club would be putting on a Cthulhu Mythos-themed game, I started looking at the kind of figures that were around. We were all invited to submit a named character for the forthcoming game, which I have done, and this made me look around to see what was available in case  I might want to have a particular miniature to represent her in the future.

I decided on the set of Four Female Archaeologists by Copplestone Miniatures.

Here they are, as I painted them; 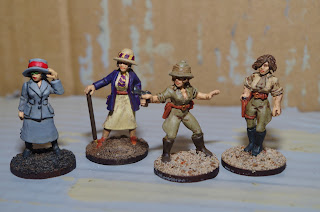 Originally a mathematics graduate and amateur archaeologist, Dr de St Aubin first developed an interest in prehistoric megalithic sites and the geometry of such sites while undertaking her Mathematics DPhil at Oxford. Her research, published some years after completing her doctoral thesis, was entitled “The night sky and sacred geometries of pre-historic sites in south-western France” and attracted the attention of Professor Markus Mazur of the University of Krakow., an expert in prehistoric alignments and obscure cult practices. This led to Dr de St Aubin taking up a post of research assistant to Prof. Mazur. Developing her interest in archaeology, Dr de St. Aubin returned to France and studied the subject at the Sorbonne.

Dr de St. Aubin is known for her archaeological studies at a number of ancient sites in Anatolia, the Caucasus and the Levant. Her work on early Bronze Age ritual sites found near Carchemish in Syria, which identified them as being sacred to a number of obscure and arcane deities, although unknown to the general public, is widely considered in Arcane Studies circles to be the definitive study of the cults of a number of previously unknown deities, two who have tentatively been identified as Azathoth and Nyarlathotep, in the Bronze Age Middle East. A noted polymath and linguist, Dr de St Aubin has spent the last three or four years translating a copy of The Necronomicon from Mediaeval Occitan into modern French.

Originally forming her doctoral thesis, and later expanded into a three-volume study, Dr Ward’s groundbreaking work on the subject of prehistoric chthonic cult survivals in the Graeco-Roman world is widely considered to be the authoritative text on the subject. Her work on the relationship between the Pnakotic Manuscripts (Koine Greek translation) and the Enochian texts of Dr John Dee is considered to be a classic example of Arcane Anthropology.

First joining the staff of Miskatonic U as a research assistant to the late Professor Ferdinand Ashley, Dr Ward was later Curator of Arcane Incunabula and Manuscripts before taking up her present duties. She has undertaken lengthy fieldwork in the Andes, Polynesia and Tibet. Dr Ward is currently combining her academic duties with field research into the Witch Cults of 17th century New England and their links to similar cults in Europe.

Dr Ward is a former champion fencer and a keen amateur photographer.

A History graduate of Cambridge University, Prof. Thomas undertook post-graduate research at the University of Göttingen and later completed her doctorate in Archaeology at UCL. Professor Thomas is considered to be the world’s leading authority in the subject area of pre-Druidic cult practices in the British Isles and has published a number of works on this subject. She is a visiting lecturer in Arcane Archaeology at both Miskatonic University and the École Nationale des Sciences Arcanes, where her Summer Schools are always well-attended. Her most recent publication is “Pre-Bronze Age West Semitic Cult Survivals in Mediaeval Palestine and the Crusader States”. She is also known for her archaeological investigations at Megiddo and elsewhere in the Middle East. Her recent identification of a site 75km north-west of Sakaka in Saudi Arabia as a candidate for Irem of the Pillars has been controversial, but some authorities who have examined cult objects and inscriptions excavated from the site are supportive of her claim.

Although not a professional anthropologist or archaeologist, Miss Broadbury is well-known in specialist circles because of her work as an assistant to her late great-uncle Professor Sir Henry Exham, the famous Egyptologist and Professor of Hittite Studies at Brichester University.. A graduate of St Hilda’s College Oxford with a Master’s in Classics and Ancient History, Miss Broadbury is fluent in many languages and has written a number of books on popular history, archaeology and the paranormal. A prominent debunker of fraudulent psychic practitioners, Miss Broadbury is widely-respected in the field of Arcane Studies for her breadth of knowledge and familiarity with obscure cultic practices. She has carried out unspecified investigative work for certain agencies of the British government.

Miss Broadbury is an accomplished pianist and horsewoman and has represented the UK internationally at the long jump and 110 metres hurdles.