I recently joined a gaming club, the Lincombe Barn Wargames Society, and the first game I played there was Alien Squad Leader, which is a popular S.F game at the club (the author of the rules, Alex Self is a club member) and I enjoyed it so much that I decided to create my own army for the game.

Luckily, I had a reasonably-sized lead mountain of GZG 15mm figures and vehicles to paint so, with the addition of a couple of heavy Main Battle Tanks, which I bought from GZG specifically for this army and some suitably-sized MDF bases I set about putting together enough toys for both a 150pt and a 200pt army of Human Imperials. I also painted up a couple of character figures, who will feature strongly in the next version of the rules, but who are optional extras in the current edition.

For me, Human Imperials are an ideal starting point, and not only because I had pretty much everything available. I think that they suit my style of play, being both shooty and featuring tanks. There are also options to field fighting droids of varying sizes. Happily, I had a GZG battle mecha model waiting to find a purpose, so it seemed only right to equip my forces with a big shooty battle droid. I shall look at smaller droids in the future and possibly also some kind of ground attack flyer.

Anyway, I have put together some basic infantry Stormtroopers, some Heavy Weapons support, a couple of command stands, some Space Marines, light AFVs (tracked and anti-grav) an armoured command vehicle and the aforementioned MBTs and Battle Mecha.

So, here are the pictures, starting with the Poor Bloody Infantry (plus an army High Command character); 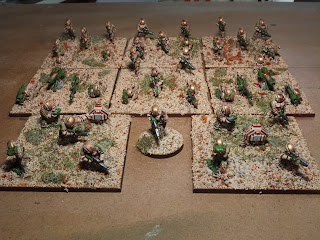 Next, the Space Marines, equipped with jump packs (and a Hero of the Empire); 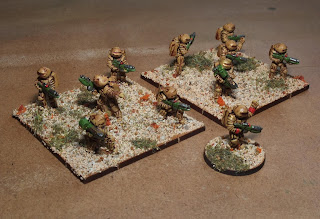 And then the armour. First, the light stuff. Two tracked AFVs, two anti-grav ones and an ACV; 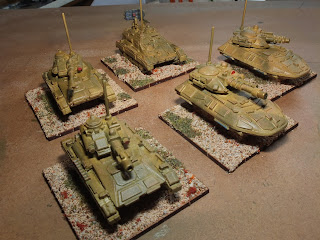 And, finally, the heavies, the real sloggers; 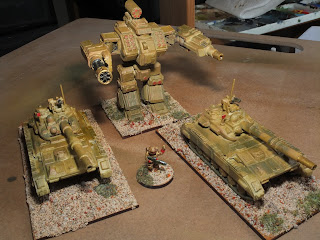 I went for a desert/semi-arid planet camouflage style for this army so that the vehicles at least will fit in with my Quadrant 13 armies. I rather like the way that they have turned out and I am looking forward to seeing them on the table in the near future.