I have had these two carts for ages. I bought them from Warbases at Colours back in 2019. I thought it was time to finish them off. 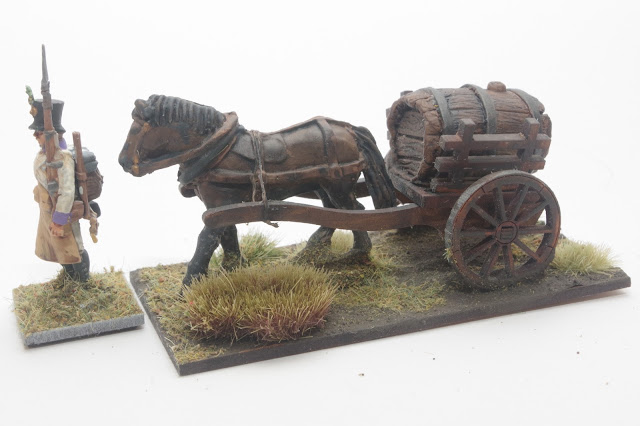 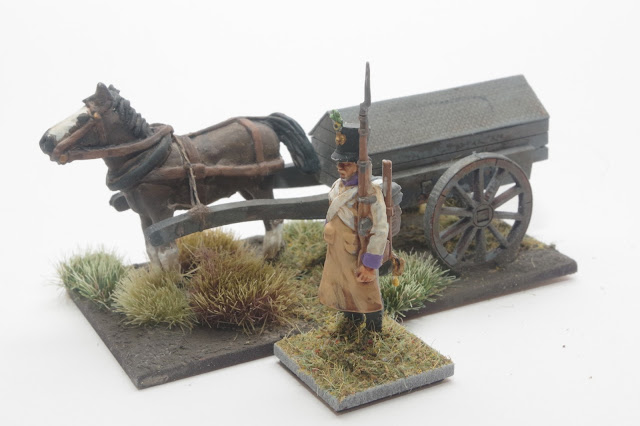 As you can see, one is a water cart and the other is for ammunition. As I said, I bought them from Warbases, who also provided the horses, but you need to buy them separately, they don't come as a kit. I've got another cart from Warbases somewhere, which I'll make sometime but I don't currently have any draft animals for it. The tufts are from Gamer's Grass and the base texturing is AK Terrains Dark Earth gunk.

I decided to make the bases look like a spot of rough going, because it adds interest, hence the luxuriant grass and foliage.

I've posed them with Austrian pioneers here, but they will be useful for lots of different 28mm armies. Ammunition and water carts are useful support options in Sharp Practice.

The rest of my Austrian Fusiliers

Here are the last three groups of my Austrian Napoleonic Fusiliers; 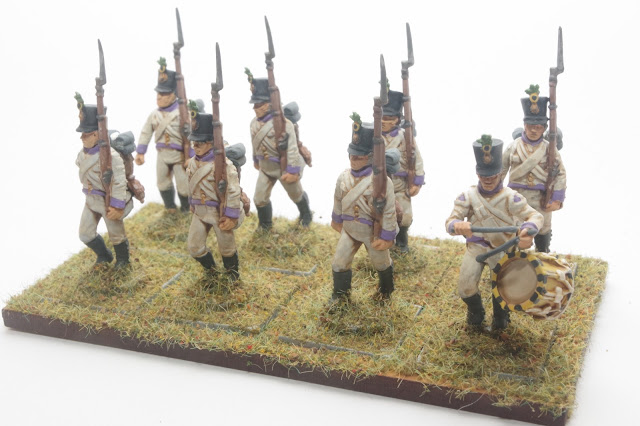 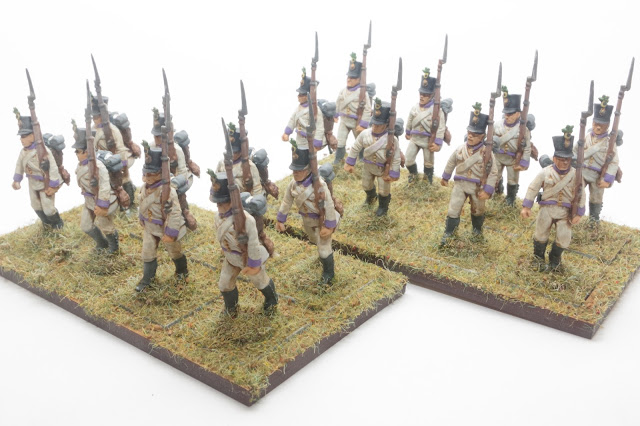 So, I now have six groups of eight figures, which is a pretty large force in Sharp Practice terms once you have added in Leaders, skirmishers and possible support options.
Obviously I don't have to use them all in a game, but it does give me various options. For example, I could field two equal commands of three groups with a couple of leaders each and bulk things out up to around 85 points with different additions, perhaps some Grenzer skirmisher groups of six, or maybe Landwehr militia groups of ten. Cavalry would also be an option. It all depends on the scenario.
I am pretty pleased with how they look and that is it as far as like troops goes, but I've just started work on three groups of Grenzer.

Here are some more Austrians for my Sharp Practice project; 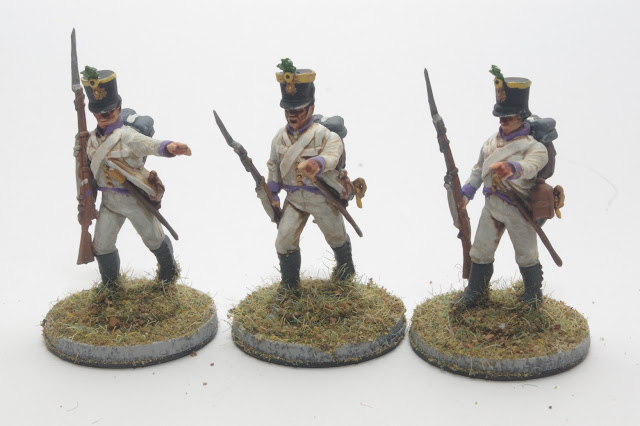 These are three NCOs, who will be Status I leaders in Sharp Practice and below are the three Pioneer figures I mentioned previously. 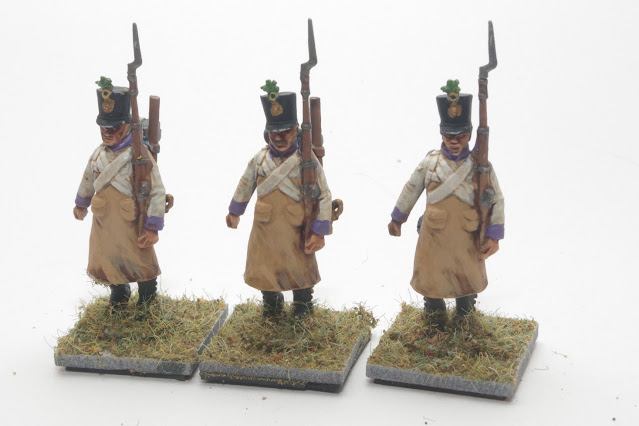 As I said before I'll have to find a use for these. I suppose I could use them as part of a work party for specific tasks, maybe just escorting wagons or as characters in a scenario.
Finally, below is a third group of eight Fusiliers; 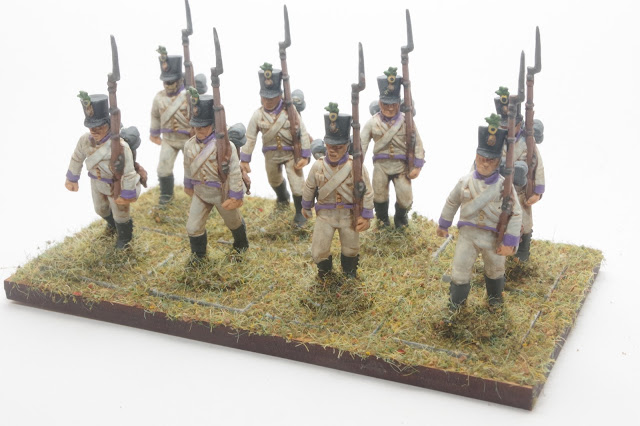 A note here about how I painted the white uniforms. The figures were all undercoated with Tamiya pale grey spray. The uniforms were painted in with slightly-diluted Vellejo ivory and once the figures were painted given a wash with Army Painter Quickshade acrylic Soft Tone, the stuff in the dropper bottles not the tinned one. This took the bright edge off of the ivory white and added depth around the belts and straps on the figures. I think it worked out pretty well.

I first had the idea of an Austrian force for Sharp Practice ages ago, back in 2019 but I didn't do anything about it until 2021, once I'd got round to buying an initial tranche of Perry figures. Even then, they sat around in a pile of other boxes until this summer. Here are my first completed figures; 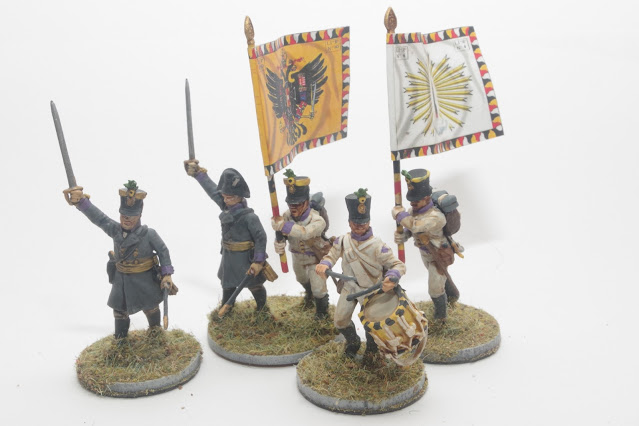 I like to start off with leaders when I am working on a Sharp Practice project, so here are two company officers, the Hauptmann on a larger base with a standard bearer so he sticks out, an Oberleutnant, a separate Fähnrich (standard bearer) and a drummer.
Next, two groups of German Fusiliers (Perry doesn't do plastic Hungarian troops) so I was denied the chance to paint Fusiliers wearing nice sky blue Hungarian trousers. 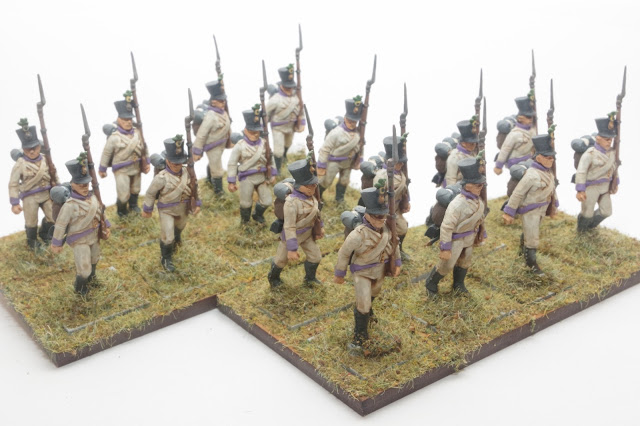 My project will have a total of six groups of eight Fusiliers, officers and NCOs, all from the 57th Regiment, which had mauve (officially described as "pale red") facings and yellow metal buttons. I've been working on these solidly for two weeks now and are all painted. I'll do another couple of posts about them soon.
I actually bought two boxes of infantry and an extra command sprue, which gave me enough bodies to do a separate unit of Landwehr in four groups of ten if I field them as Militia or five groups of eight if I want to use them as an 1813-15 regimental fourth battalion, which was comprised of Landwehr. There will also be leaders, obviously. These are undercoated so I'll get round to them soon.
The command sprues also contain pioneers with aprons, so I have three of these too. I don't really have any specific use for these, but each company had one pioneer. I've painted them up and I'm sure I'll find a use for them, maybe in specific scenarios.
I also bought some metal Grenzers to use as skirmishing troops. I have enough of those for three groups of six plus a couple of leaders. These are also undercoated and will be my priority now that all the Fusiliers are done.
In addition I have a box of Chevaulegers, which are glued together but not yet undercoated and another of Hussars (so pretty, I just had to get some). To round things off I bought some Eagle Miniatures Jägers which I will probably use as rifle-armed Landwehr Schützen. The figures aren't strictly accurate for Austria as they aren't wearing gaiters, but they will look fine when painted.
This has turned into a much bigger project than originally planned, but that is always the way, isn't it?

I've finally nearly everything done for my Honours of War project, apart from the cavalry. Here are my last three infantry battalions; 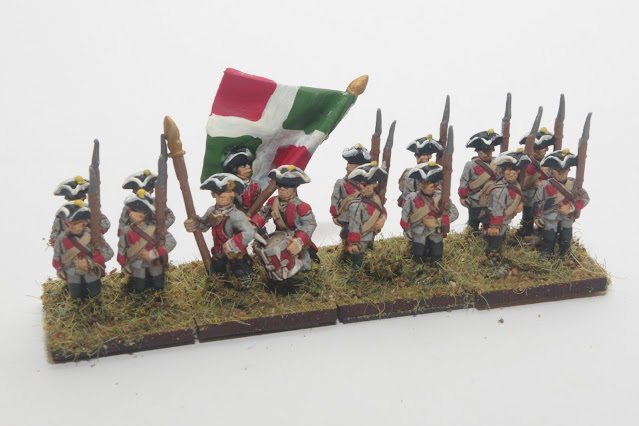 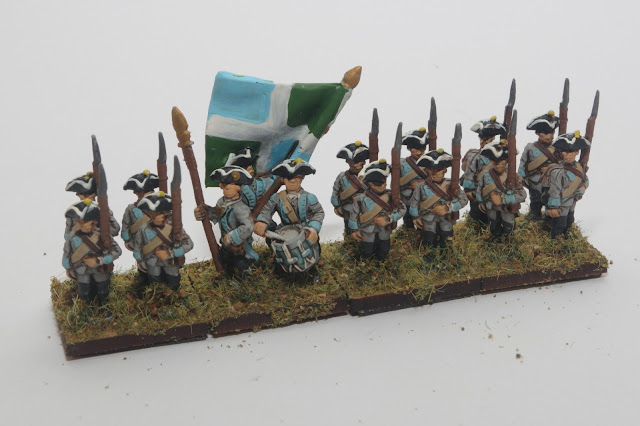 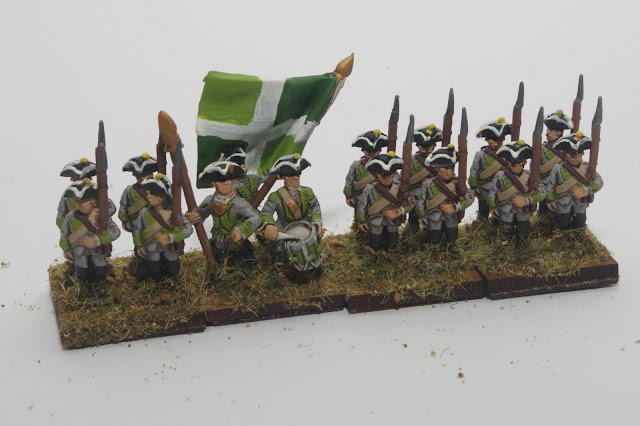 Overall, I am pretty happy with what I've done with this army so far. Even without cavalry it is a pretty reasonable force. It would certainly suffice for most games of Honours of War.

I'll be working on the cavalry over the rest of September and into October, but for the moment I will be concentrating on a 28mm Austrian Napoleonic project that I really should have got on with last year. 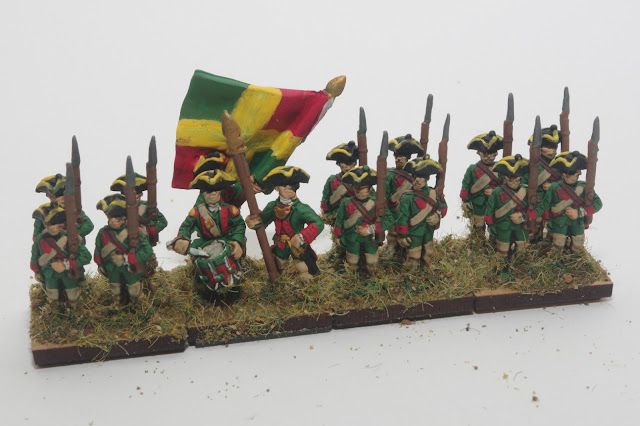 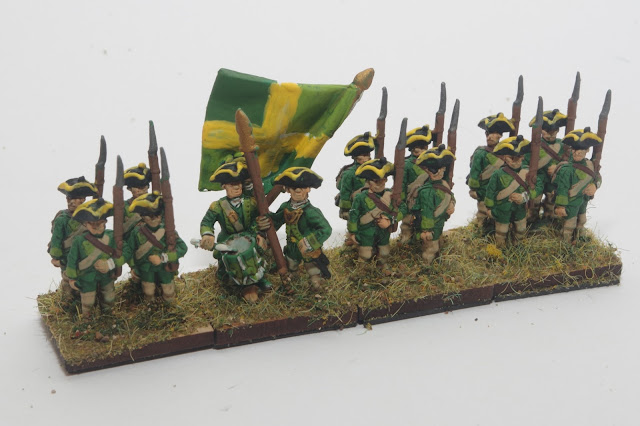 These two battalions represent troops recruited in the Margravate of Streslau. The current Grand Duke, Carl Emanuel III was the Margrave of Streslau before succeeding his father, Carl Emanuel II to the title several years ago. Streslau has been a feudal vassal of Überwald since the 16th century and provides well-respected and stubborn infantry to the Ducal Army.

The infantry regiments of Streslau wear green uniforms and their standards are distinguished by the yellow Cross of St Alberich, the patron saint of Streslau.

Guns and limbers for my SYW project

Here is the artillery for my SYW imagi-nation for Honours of War;

Above we have the limbered guns for movement before or after deployment and below I have placed a cannon on one of the artillery bases I finished a while ago, to show how the deployed guns will appear on the table. I think this has come out rather well.

I have also finished off the rest of my infantry battalions, but I will do a separate post about these.