A Frostgrave AAR - my warband gets its first outing.

Last Sunday at the club my new Frostgrave warband got on the table against three other bands, those of Owen, Richard and Andy. Kev umpired the game. Unfortunately, I forgot my camera, but luckily Owen took plenty of pictures, and he has kindly let me borrow them for this blog post.

This was a one-off game but I think that we are now planning a proper campaign, which will be good. So, here is the initial table; 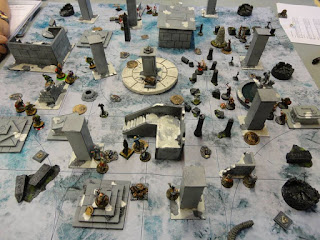 People are already starting to deploy. I am coming in from the right of the picture. Here are some of my desperadoes moving through the ruins. 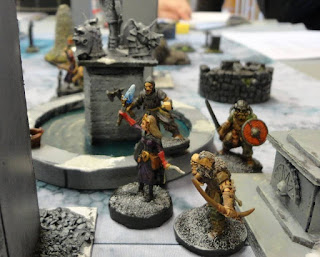 The game was notable at the start for the inability of the wizards to actually cast any spells, occasionally even causing themselves varying amounts of harm. At this point, I decided to save using magic until it was absolutely necessary. 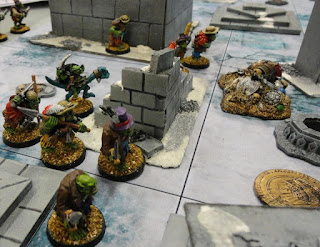 Andy's band of Orcs made swift progress towards a huge pile of treasure but soon ran into problems and ended up embroiled in combat against a summoned demon that Richard brought on to the table as soon as he stopped failing to cast any spells. 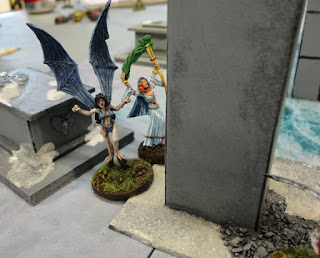 His wizard seemed happier after that and late on in the game managed to cast Scatter Shot, which pretty much damaged everyone within range. He also managed to pick up an imp to fetch and carry coins. 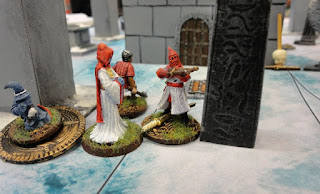 Elsewhere, Owen advanced quite quickly, but became tangled up in a long-running combat with a ghoul. My wizard cast Bones of the Earth on one of his fighters, which anchored him while he was fighting the undead creature, allowing my guys to get past and head for more plunder. 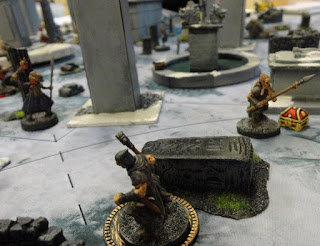 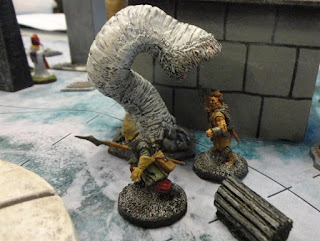 Unhappily, a large and threatening White Worm attacked two of my thugs, killing one easily but the other fighter managed to hold on. 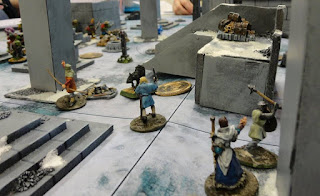 Owen's band seemed like an easier target than a giant grumpy vermiform, so I concentrated my attacks on them, sending an archer and a couple of fighters to pick off his gang. 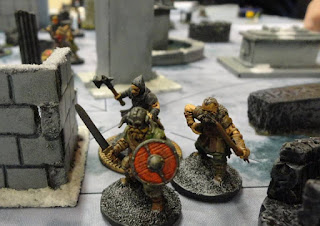 At the same time, I sent a couple more of my men (including a zombie that my wizard raised from the grave) across the table to secure more loot. Owen's thief in the foreground wasn't really a threat. 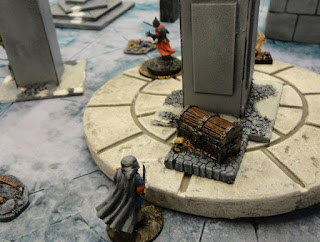 Elsewhere, Andy was reeling from endless magical and earthly attacks, but managed to get his treasure away safely, even eventually seeing off the demonic entity that had caused him so many problems. 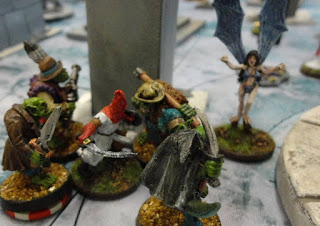 I also decided to cut my losses and make off with my plunder. Meanwhile Richard was plagued by a succession of attacks from marauding giant rats. 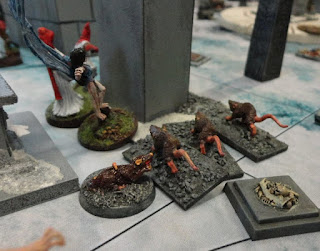 All in all, this was a terrific introduction to Frostgrave. The game mechanisms are pretty easy to grasp and the action comes fast and furious. I look forward to actually being able to gain experience and wealth in future games.

In the meanwhile, I shall be painting up a few more magic users and maybe some other odds and ends for my Frostgrave collection.